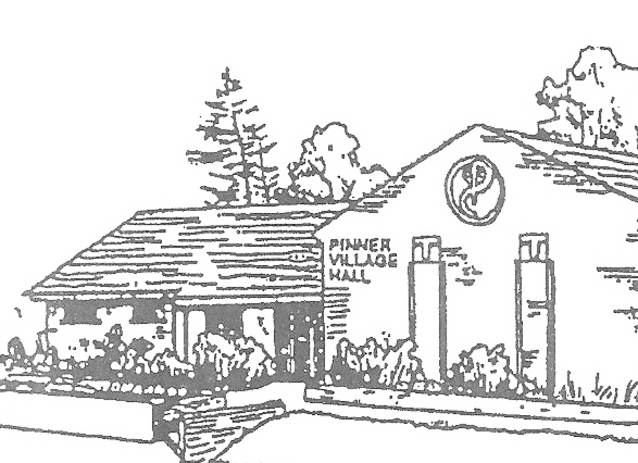 The campaign for a new Village Hall was inadvertently started many years ago by the old Middlesex County Council when they purchased the land at the bottom of High Street, currently named Bridge Street Gardens, but always known as High Street Gardens.  Their intention was to drive a modern dual carraige way up Bridge Street through this land, which then contained the old Village Hall. Fortunately, this did not immediately come to pass and the old Village Hall served as the library for many years.

Some years before the demolition of the old Village Hall, the Pinner Association had entered into a partnership with Harrow Council to carry out a Civic Improvement Scheme in High Street along the lines of something pioneered in Norwich.  The impetus for this came from the defeat of what was known as the Prowting scheme to build a huge tower block on part of the land then owned by the Woodmans behind the High Street and to rebuild much of the lower north side.  However, before the Civic Improvement Scheme came to fruiton in 1970, the old Village Hall was suddenly demolished and this caused the Pinner Association to start a sub committee to campaign for the Council to build a community hall at West House as a replacement.

The celebrations for the completion of the Civic Improvement Scheme known as Pinner Week was then used to start fund raising for a new Village Hall at West House on the assumption that the Council would be unable to fund such a building although they had entered into a Covenant to do so when they took over the running of the West House Estate from the old Pinner War Memorial Fund.  This campaign quickly gained impetus and the Pinner Association decided to float the embryo project off under the umbrella name of Pinner & District Community Association (PADCA).

Years of fund raising and arguments followed before Stage 1 of the new Village Hall finally opened in 1982 on its current site.  In the meantime, PADCA had a temporary home in the old Pinner Centre which then stood in School Lane between the railway line and the Marsh Road shops.

The rest of our history has been the gradual improvement and extension of the buildings on our current site.  All this had been funded by our own efforts and the generosity of many residents.

HOW TO FIND US

By Train:  Pinner Village Hall is a short walk from Pinner Station on the Metropolitan Line.

By Car:  There is ample parking in the adjacent pay and display Chapel Lane Car Park.